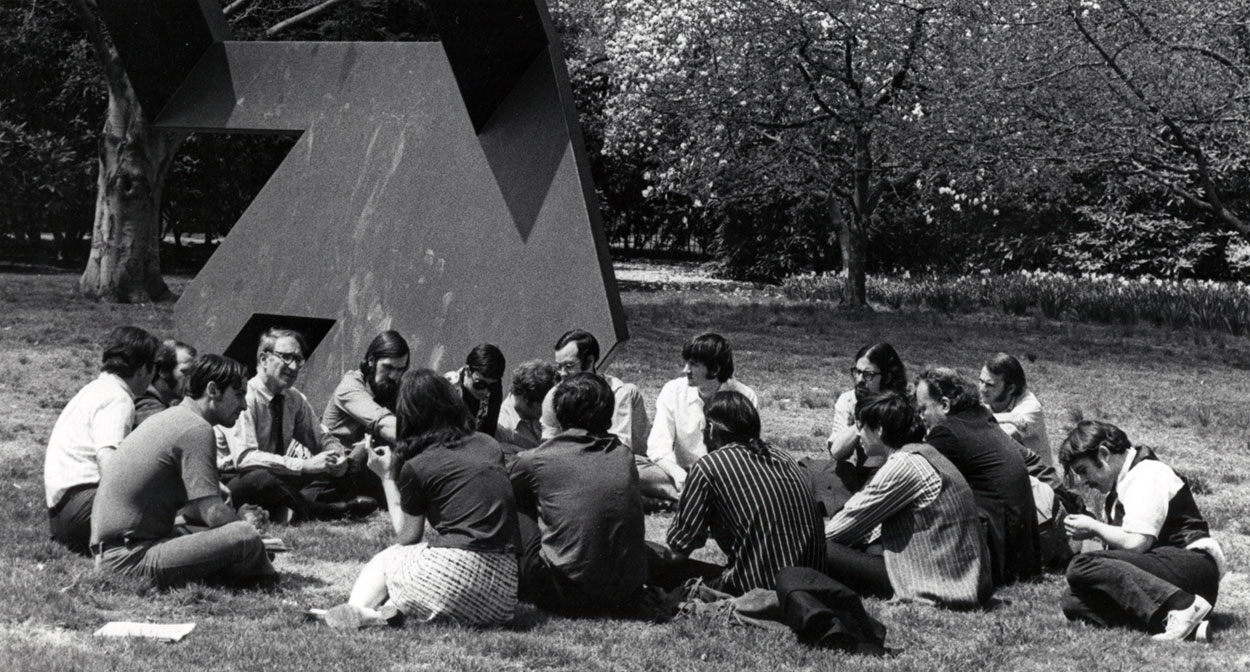 In the 1960s, Princeton’s, School of Architecture moved out of its historic home into a new building with a new curriculum, a new library, new faculty, and its first Dean. The School was one of Princeton’s three professional schools in the Graduate School, as well as a department within the humanities section of the undergraduate college. In this context, a new introductory course to the study of architecture emerged.

Beginning in the 1840s, the Princeton scientist Joseph Henry offered the first series of lectures on architecture in America, entitled “Civil Architecture.“ Thereafter, the introductory course took different turns, including “History of Art”, “Drawing and Design”, and “Visual Arts as Cultural Expression“. The new 1960’s introductory course explored architecture as a social art engaged in the design of the human environment.

Professional tributes upon selection for the 1984 Topaz Award from the Association of Collegiate Schools of Architecture and the American Institute of Architects.

Robert Geddes, FAIA, is one of those rare architects whose prodigious energies and quiet dedication have enabled him to lead a design practice while earning his reputation as one of the nation’s foremost architectural educators. His creativity flows from his remarkable ability to draw together seemingly disparate disciplines and project an optimistic vision that can be enjoyed by his colleagues, students, and, through his humane designs, the public as well. 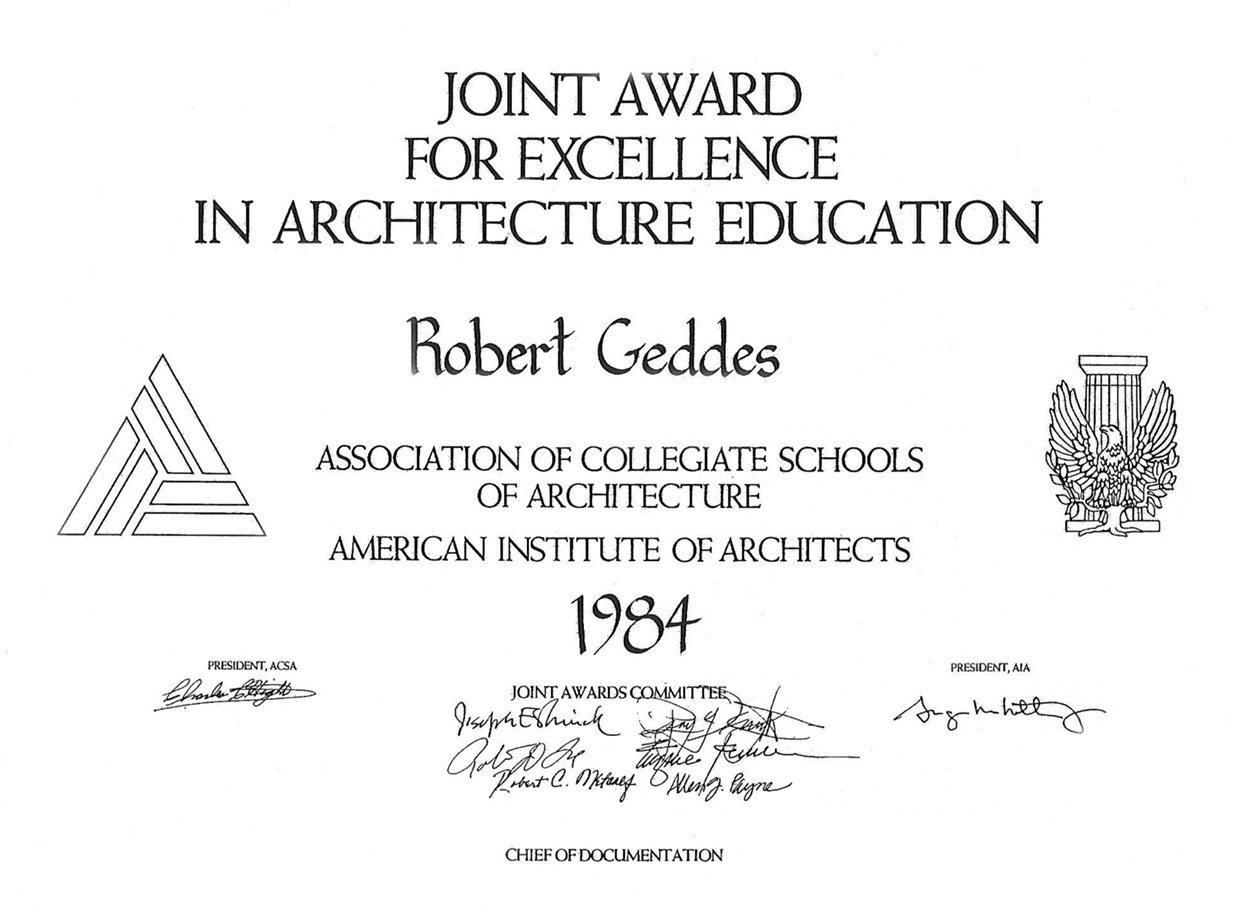 “In the world of architecture, urban design and architectural education, it is rare to find one person who excels in all three. Bob Geddes is one of those rare architects who has balanced his life’s work between the school, the marketplace, and the public work of city planning and urban architecture. There are also few people in our profession with a list of contributions to society as a whole that can compare to Bob Geddes.” - Frank Gehry, FAIA, Los Angeles

As Dean and teacher, Geddes has helped generations of students, faculty, and professionals find their way through a particularly turbulent, often confusing, period of architectural history, theory, and practice. He carefully selected his faculty members, placing a premium on young practicing architects who are now among the country’s leaders. He developed a model interdisciplinary curriculum and new teaching methods that balanced the explorations in the design studio with the opportunities to develop understanding and stimulation in both the humanities and the social sciences.

“The achievements of Dean Robert Geddes in architectural education will unquestionably have a lasting effect on the profession. He has helped to create an architectural firm that is acknowledged to be exemplary. He has been an influential teacher for three decades, and he presided over one of the most distinguished and demanding schools in the country for almost two of those decades.” - Donlyn Lyndon, FAIA, Professor Emeritus of Architecture and Urban Design, University of California, Berkeley

As one of Princeton’s most popular teachers, he is known for lucid and thought-provoking lectures on architecture, landscape, and cities. He has inspired thousands of students with a keen love of architecture, its history, and its integral role in their personal and professional lives, as well as in society at large. Geddes is now the Henry R. Luce Chair in Architecture, Urbanism and History at New York University. This nationally-honored position lends resonance to his call for an architecture that speaks of people and their history.

“Bob’s ‘Princeton Report’ (AIA ‘Study of Education for Environmental Design’, 1967) changed the structure of architectural education in the United States... affecting the curricula of nearly all schools... It has been a most important improvement in the training of architects by providing a richer and broader education than previously and enabling [architects] to practice effectively in today’s complex environment.” - Lee Copeland, FAIA, Former Dean, University of Pennsylvania School of Design and Former President, National Architectural Accrediting Board, NAAB

There is another side to this remarkable educator. A blend of pragmatism and theory, Geddes’ architectural practice has closely paralleled and enlivened his academic work for nearly four decades. As founding partner of Geddes Brecher Qualls Cunningham: Architects, he has been the designer of an impressive body of work that has long enjoyed an international reputation for consistently fine design. GBQC is indelibly stamped with his broad vision of architecture and guided by his humanist values. He structured the organization as a group practice, so as to maximize creativity through the collaborative nature of the work among its designers, technicians, and managers. His firm has received awards for management leadership, as well as overall design excellence, including the AlA Firm award in 1979.

“I look back at all the things he has done and I look at his apparently shy and retiring personal manner, and I think, oh, what a teacher and producer of talent he has been. I am presumptuous enough to consider that I am in some small way one of his students, one who has certainly benefitted from his insights and experience. The breadth and depth of what he has done is phenomenal.” - Edward Logue, former Director, New York Urban Development Corporation and Boston Redevelopment Agency

Fit: An Architect’s Manifesto is a book about architecture and society that seeks to fundamentally change how architects and the public think about the task of design. Distinguished architect and urbanist Robert Geddes argues that buildings, landscapes, and cities should be designed to fit: fit the purpose, fit the place, fit future possibilities. Fit replaces old paradigms, such as form follows function and less is more, by recognizing that the relationship between architecture and society is a true dialogue—dynamic, complex, and, if carried out with knowledge and skill, richly rewarding.

With a tip of the hat to John Dewey, Fit explores architecture as we experience it. Geddes starts with questions: Why do we design where we live and work? Why do we not just live in nature, or in chaos? Why does society care about architecture? Why does it really matter? Fit answers these questions through a fresh examination of the basic purposes and elements of architecture--beginning in nature, combining function and expression, and leaving a legacy of form.

Fit is a book for everyone, because we all live in constructions--buildings, landscapes, and, increasingly, cities. It provokes architects and planners, humanists and scientists, civic leaders and citizens to reconsider what is at stake in architecture—and why it delights us.

Robert Geddes is an architect, urbanist, and teacher. He is dean emeritus of the Princeton School of Architecture; Henry Luce Professor Emeritus of Architecture, Urbanism, and History at New York University; and a fellow of the New York Institute for the Humanities and the National Academy of Design. The American Institute of Architects honored his professional firm for its “design quality, respect for the environment, and social concern.”

Fit: An Architect’s Manifesto is available through the Princeton University Press and other booksellers.

"In this elegant little book, mixing aphorism and example, Robert Geddes argues for the importance of ‘making it fit’ and shows us the many ways of doing this. His manifesto is both provocation and enlightenment." - Michael Walzer, Institute for Advanced Study

“Robert Geddes has written a lucid, perceptive, and wise book about the fundamental elements of architecture, including the basic needs that it addresses, as well as the wide range of architectural approaches and styles available to the designer and practitioner today. He does not, fortunately, propose easy solutions to the deep challenges facing contemporary architects and urban planners, but instead offers principles and considerations that can help them create works that can be 'fit' for their purposes, places, and times.” - Neil Rudenstine, President Emeritus, Harvard University

“This is an enchanting book. Robert Geddes admirably makes the case for architecture as a social art in which function and aesthetics are complementary rather than mutually exclusive. The book provides an excellent primer for both makers and consumers of architecture--a checklist of issues to be addressed during the design process, and a lens through which to see and appreciate architecture.” - Urs P. Gauchat, Dean of the College of Architecture and Design, New Jersey Institute of Technology

“Fit is a pleasure to read--lucid, wonderfully lively, and continuously interesting. Geddes’s mode of arguing by quotation and illustration is very appealing, like talking with a great conversationalist with a well-stocked mind and library. And there is a real moral to the book's argument about what our architecture needs more of.” - Alan Ryan, Princeton University and University of Oxford